Another Month, Another Grand Jury Ruling, Another Round of Protest 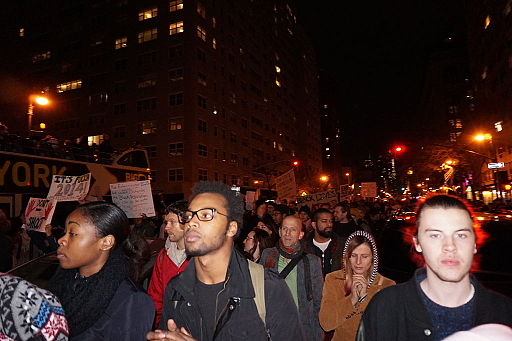 After a November of what will become historic events — the decision not to indict a police officer for shooting Michael Brown, the point-blank shooting of 12-year-old Tamir Rice and the protests that followed both — comes December.

“The U.S. is what it’s always been: chaotic,” said senior Jeron Gaskins. “Now, is there more racial tension than usual? Yes, to a point, there is always tension, but cases like Trayvon Martin and Mike Brown’s just remind people that racism does exist.”

Race has come up after the Ferguson trial, however without all the information, it’s hard to form reliable opinions.

Most recently, social media users claimed that a young man killed in his car on the night of the grand jury announcement had been a witness and was killed because of his testimony. This story was later proved false when the victim’s name did not appear on the list of witnesses published after the decision.

Since the verdict, the prosecutor released all the evidence given to the grand jury, but it’s an overwhelming task to sift through it all.

“I think the verdict was unfair, but in all honesty the jury was thrown so many stories that they didn’t know what to believe, and yes, maybe it is just common sense but you gotta look at the evidence,” sophomore Scott Baul said.

People’s beliefs about what should have happened have sparked protests nationwide . Of the seven students interviewed, all believe that protests, when peaceful, are a justifiable response to demand change.

“I think that the protests are a direct result of the sentiment among citizens,  especially minorities, that they are not represented in their government, and are in fact antagonized in their own country,” said senior Lea Kayali, “In the past, what have we done to change a nation that doesn’t serve it’s people? We protest. Ferguson is just the latest chapter in the book about the struggle for social justice, and hopefully as in the past, a significant change will result.”

Kent State University, Case Western Reserve University and Oberlin College students held peaceful protests Nov. 25. They chanted, “I am Mike Brown . . . I am Tamir Rice . . . I am every black life that has been lost at the hands of the police.”

Last night, Times Square erupted in protest after a grand jury decided not to indict Pantaleo even though the medical examiner declared the incident a homicide.

Grand Central Station was filled with protesters who staged a “die in” where they lay down on the station’s floor.

Protesters also marched on Times Square, chanting, “I can’t breathe,” and “Garner and Brown, shut it down.”

In addition, Northeast Ohio residents are processing the shooting of 12-year-old Tamir Rice, who was was killed by rookie Independence police officer Tim Loehmann Nov. 22 after a 911 caller reported he was pointing a gun a people at a Cleveland Park. The gun was a toy.

Again, information about the shooting is limited to police statements and a grainy, soundless security video that shows the police cruiser stopping close to Rice and an officer shooting him immediately after getting out of the car. The poor video quality makes it difficult to see what Rice was or was not holding before being shot, and no audio exists to prove what the police did or did not say before shooting.

Without more substantial information, people form rash opinions. After the shooting, people who represented themselves as members of the activist group Anonymous even hacked into the city of Cleveland’s website, disabling it and releasing a video demanding justice.

According to the Northeast Ohio Media Group, before joining the Cleveland police, Loehmann trained with the Independence Police Department, which had described him as “weepy and distracted” during weapons training. The Independence police claim he was already in the process of being removed from the department when he resigned.

Freshman Sophia Solganik hopes protest efforts steer the conversation toward solutions. She said, “A message that I hope can come across in protest is the value of non-lethal weaponry, lives of minors and communication between police and emergency services.”