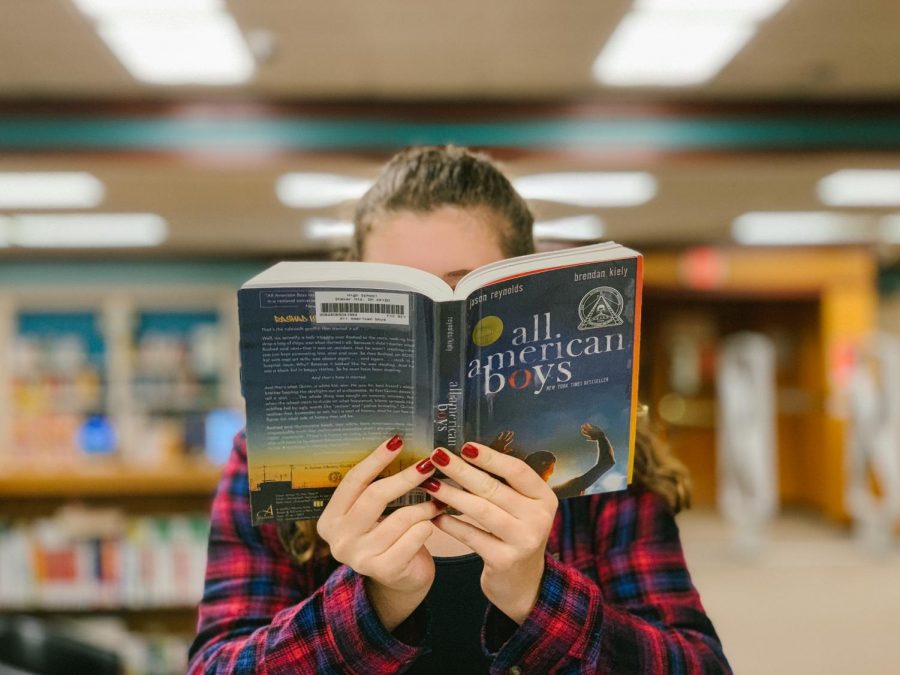 Authors Jason Reynolds and Brendan Kiely were compelled to write "All American Boys" when George Zimmerman was found not guilty in the death of Trayvon Martin.

Authors of the the novel “All American Boys,” Jason Reynolds and Brendan Kiely, spoke to students and community members about police brutality and racism Oct. 1 in the large auditorium.

The recipient of a 2016 Coretta Scott King award and the Walter Dean Myers Award for Outstanding Children’s Literature, “All American Boys” follows the lives of two boys, one white and one African American, after a violent act of police brutality happens in their hometown.

Reynolds, who is originally from Columbia, Tennessee, tells the story from the perspective of his narrator, Rashad, an African-American teenager who is brutally beaten after it looked like he was stealing a bag of chips.

Brendan Kiely, a Boston native, portrays the story from the perspective of a white teenager named Quinn, who saw the incident and grapples with the presence of prejudice in his town.

According to high school librarian Robin Sweigert, Shaker Middle School librarian Debra Quarles suggested the authors should come to Shaker. The district approved the visit and completed the arrangements.

When Reynolds, who is African American, was 16, he and his friends were handcuffed and shoved to the ground after speeding through a yellow light, which the police officer claimed was red. The officer called for backup and asked if there were firearms or drugs in the car. Eventually, Reynolds said, the police searched the car, tossed out their belongings and teased the boys.

“We didn’t even know that anything abnormal had happened to us,” Reynolds said.

Reynolds said that his heart raced while he was being handcuffed because he had been given “the talk” years before. “The talk” warned him to be kind and respectable to officers so that he would not be killed or injured. He said that talk — which African-American parents so commonly give to their children that it has acquired a nickname — saved his life.

Reynolds said that his experience is common throughout America. “I could’ve grown up in Shaker Heights and this would’ve happened,” he said.

In contrast, Kiely said that when he was a teenager, he was speeding down the highway one night, about 30 miles per hour over the limit, when a police officer pulled him over. Kiely began apologizing. The officer pitied Kiely and sent him home. Kiely called this incident “the story of white privilege in America.”

The duo wanted to make it clear they are not against police. “We are not anti-police. What we are is anti-police brutality,” Reynolds said.

After sharing these stories, Reynolds and Kiely answered audience questions.

Questions ranged from the level of racism in society today to what reactions the authors expected after the book was published in 2015.

“I think the questions that the students asked were interesting. There were a variety of questions, and just the fact that some of the kids looked young and they were able to go up and ask questions was great,” Sweigert said.

Kiely and Reynolds both said the bigotry and racism in America today has been present for hundreds of years. The difference, according to Kiely, is that “for a long time we were kind of at high tide, and now it’s low tide, and all of the stuff that was there at high tide is now visible.”

“I really liked what [the authors] said with their partnership and how that was able to let them be honest and really express how they felt about racism in a better way,” Cuyahoga County librarian Giyana Willoughby said.

Reynolds also said that increased awareness of police brutality means we have to “be very careful and not forget the people being hashtagged are real human beings.”

Kiely said that following one of his talks, he was cornered by a white supremacist. He called Kiely a “traitor.” Kiely said he was shaken by this but realized that you can’t change racism overnight.

The authors stressed that empathy and listening are key to addressing prejudice. “You don’t need to know a person to care,” Kiely said.

Sophomore Jonathan Senturia said he wanted to ask the authors how often they noticed segregation in their audiences, although he did not get the chance to do so. “I wanted to know how many times they see that happen because I have the bad feeling that they see it way too much,” he said. “And I have a feeling they might have even seen it tonight as well.”