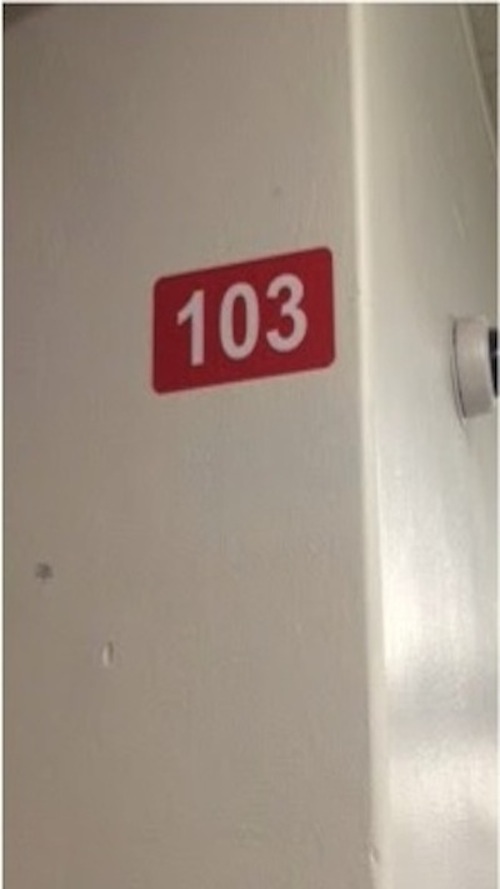 The new red and white room numbers that were installed Sept. 8, 2015.

One hundred and nineteen rooms inhabit the high school, and each one now has a bright, new number.

The new look was not achieved without some frustration, however.

September 8 marked the next step in a project to furnish the high school with a fresh look, according to Chief Custodian Sean Brown.

Brown has worked at Shaker for 25 years and is “always looking for ways to improve the product.”  The change from stenciled black room numbers to bold, white and red stickers, he said, was part of a “process of beautification, modernization” for the high school.  More changes, including new signs and updated maps, are planned as well.

While the project started smoothly, trouble arose when the old numbers remained visible through the new labels.  The maintenance staff had to take the labels down and paint over the old numbers.

This is when the confusion among students and staff arose.  During those few days, there were no classroom numbers whatsoever, only blank spaces where the old ones had been painted over.

Now that the stickers have been installed, though, they have gotten a positive response. Sophomore Ariana Bliss likes them. She said they are just “nicer looking.”

Marla Robinson, district chief of staff, said that “bring[ing] the numbers up to standard” was in anticipation of curriculum night next Sept. 10 but the district “always want things to be really top notch.”  She also made it clear that it was part of a plan to “modernize” the high school.  These plans have been in place for a while but only now, with financial help from the Shaker Schools Foundation (the PTO also helped to cover the cost), were they enacted. According to Robinson, the cost of the project was a little more than$3,000.