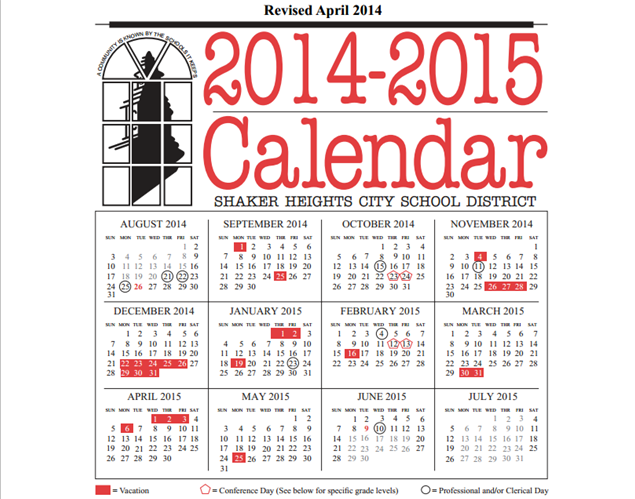 The Board of Education approved a new calendar for the 2014-2015 school year at its April 8 meeting that includes four professional learning days for teachers and reduces spring break’s duration from one and a half weeks to one week. The calendar became effective Friday, April 11. Board members also discussed the possibilities of beginning school one or two weeks earlier or lengthening the school day in the future to increase instructional time.

Spring break was shortened to make room in the school calendar for those four professional days, Superintendent Gregory Hutchings said at the meeting. “When we pull teachers out of the classroom to be a part of professional learning activities, it’s taking away from classroom instruction,” Hutchings said. “We felt that it was important, in order for us to have district-wide professional learning, so we’re not just pulling pockets of teachers [out of staffing for small-group professional development activities], we can have district-wide initiatives, that we need that time” for professional days rather than for spring break.

Hutchings said that of the parent opinions he has heard, most parents believe the current spring break is too long. “Many of our students, they love that they have that many days out of school,” he said, “but I think that we need to continue to have discussions around the fact that students need to have consistency within our learning environments and in our classrooms, and that needs to be our main focus.”

Junior Leah Greggo believes a longer spring break has its own benefits for students, even if it may reduce instructional time. “Everyone works hard during the year and I think we’ve all earned a longer spring break,” she said. In addition, “having the extra two days was extremely helpful for me, as a junior, to look at colleges. In fact, I did almost all of my visits on that Thursday and Friday.”

Hutchings said the district had allotted one and a half weeks to spring break in the past to accommodate international trips taken by school groups, such as the high school’s band, orchestra and choir. “We’re making a decision to extend spring break for 300 students,” he said, referring to the approximate number of students on every high school band trip. “That doesn’t mean we should shorten those trips, we just need to get excused absences to those students so their trips will be six or seven days.”

“I think it is unfair for students in band and orchestra to miss the instructional time before spring break for a trip that is sponsored by the school,” Greggo, a former band student, said. “Especially since it’s the end of third quarter, so missing assignments could be a problem, and many teachers give tests in the last days before break.”

English teacher Elizabeth Colquitt said the shortened break is unlikely to affect her much. “Like anyone, I find a longer holiday very appealing, but considering the number of instruction days we lost to cold this year, perhaps it would be a good idea to shorten Spring Break,” she wrote in an email. “However, it won’t resolve the heinous absence problem that we have immediately before break due to international school trips.”

Additionally, professional days in the 2014-2015 school year will no longer be strictly days off for students, Hutchings announced at the BOE meeting. On “those four professional learning days, we’re looking at having district-wide community and service initiatives, as well as learning activities and learning activity packets for our families,” Hutchings said. “We want parents and students to attend museums, and we’re going to try to have partnerships with some of our local museums since we have great museums in Cleveland; we want to have community and service projects that are here in Shaker, as well as the Greater Cleveland area.”

For students without access to transportation to attend museums or community service events on professional days, “we’re going to have online activities,” Hutchings said, “and we’re also going to have packets that students can take home to do activities at home. The message we’re trying to send to our community is that learning doesn’t just take place in the classroom, that it can actually happen outside of the classroom walls, and we want to provide those opportunities for students to do that. So it will not be a day off for our kids. It will still be a learning day.”

“It sounds like a huge waste of money for the district, that is if they are paying for it in any way,” Greggo said of the initiative. “And the online program is unfair, especially for high school students who already get plenty of homework to do on days off. . . . There are plenty of benefits to having down time on days off.”

Colquitt agreed. “I think the idea of students ‘attending museums’ and the implied similar activities is lovely, but romantic,” she said. “Most teachers are more than able to provide students with unit-appropriate and current work during the school year, without going outside the planned curriculum. . . . I don’t see any reason why professional days should require students to engage in artificial activities when they can do normally planned work.”

Moreover, “I always assume my students have enough to do, without me assigning extra,” Colquitt said. “I’m opposed to artificially inserted work — which is what district-mandated work for professional days will almost assuredly be, since I can’t imagine that whoever assigns ‘professional day work’ will be sitting down with every teacher and incorporating what that teacher is doing currently in class with these activities.”

In addition, Greggo mentioned that the idea sounded “really inconvenient for parents who would have to take students who are too young to drive to these community events.” Tammy Rose, a Shaker parent, agreed.

“I am all for parents being involved in their children’s education,” Rose said. “However, not all parents are available to do activities with their children during the day due to work responsibilities or other commitments. I’m not sure that the school can mandate what activities families do together or when those activities are done.”

More changes have been made to the school calendar than just the professional days and shortened spring break. In the 2014-2015 school calendar, “because we’ve shortened the spring break, school ends two days earlier than it has in previous years,” Hutchings said. Graduation, therefore, will also occur on June 10 rather than June 12, its date in past years.

Hutchings also said the 2014-2015 school year will begin one day later than in previous years, on Tuesday, August 26 instead of Monday, August 25, “due to us needing additional time for professional learning at the beginning of the school year.” Teachers typically have one day before school starts to set up their classrooms and meet with faculty. That leaves little time for “discussions about expectations for the upcoming year, initiatives, the Strategic Plan,” Hutchings said. “So we felt that we needed to front some of that information with even more time, so we’ve added an additional day.”

The changes in Shaker’s school calendar arrive in tandem with the state government’s new requirement that schools measure instructional time in hours rather than days, which will take effect July 1. The state requires a minimum of 910 instructional hours for kindergarteners through sixth-grade students, and 1001 hours for seventh- through twelfth-graders. According to Hutchings, Shaker’s upcoming calendar exceeds both those minimums.

In upcoming years, the school calendar may see many more changes. At the meeting, Assistant Superintendent of Secondary Education Marla Robinson said that increased state-mandated tests from the Partnership for Assessment of College and Career Readiness and the state itself may force the district to lengthen the school year.

“There’s so much more testing from the state, the Calendar Committee itself is saying, ‘Let’s do this for 14-15 and see what the state ends up doing,’ ” Robinson said.

One problem lies in the tests’ timing. At least six of the 10 End-of-Course Exams to be administered at the high school in upcoming years will be administered in two parts, one in March and one in May. PARCC English language arts and math exams for third- through eighth-graders also comprise two parts, one of which will be administered in March, and the other in May. As such, to achieve good scores on those exams, a student must be familiar with a course’s entire curriculum by March, rather than June, when the school year ends.

“We’re already seeing other districts starting earlier, and there are many parents on the committee that don’t want that, but the only way to get significant increase in time is to start earlier so that all of those assessments that are starting in April, May, you have the majority of your teaching done,” Robinson said. However, “it’s bigger than just tweaking,” she added. “You’re not talking [adding] a day, you’re talking [adding] a week or two to really make a difference.” Longer instructional days would also be an option.

“I’ve always been in favor of longer school years in theory,” Colquitt said, mentioning a year-round schedule with “four longish holidays” as a potential remedy to the amount of learning students lose over the summer. “However,” she said, “if longer school years are being implemented solely for the purpose of further test preparation, I’m against it.  I’m pretty much against all of this ridiculous testing nonsense that we’re suffering through right now — it’s cruel to the students, and frustrating and insulting to the teachers.”

Any significant change to the amount of instructional time would require negotiations with the Shaker Heights Teachers’ Association.

“This is still kind of an experimental year,” BOE President Bill Clawson said of the 2014-2015 calendar. “We like what we’re putting forward. But again, as parents plan outward, the ’15-’16 schedule might look a little different.”

Hutchings was reluctant to discuss significant changes to the school calendar beyond the 2014-2015 school year. “We need to work on the time we have now, make that extremely robust, then talk about expanding what we can do,” he said. “Let’s make sure teachers are teaching, their time on task is up to par, then let’s get more time for our kids.”