After Trump's election and a social media incident, alumni organize a chance to share feelings and opinions 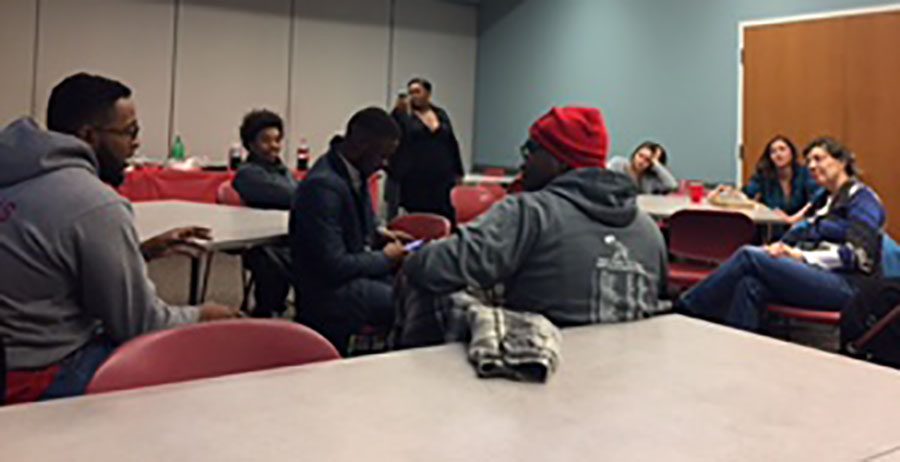 Alumni converse about the community Nov. 23 at the Shaker Heights Main Library.

Concern about damage to the Shaker bubble and the election dominated an alumni discussion Nov. 23 at the Shaker Heights Public Library.

“I feel that were all very naïve about the world because everyone here is so open and able to talk about things, so I feel like we had to come back,” said Nora Harris (’10).

The discussion, which drew about 15 participants,  was organized as the community reacted to the election of Donald J. Trump as the 45th president of the United States and the district’s decision to suspend students for their roles in publishing one student’s racist messages to social media accounts. Four topics were written on the dry-erase board before particpants arrived: black lives matter versus all lives matter, the election, Shaker Heights moving forward and hate crimes 2016-17.

The expression “Shaker bubble” is often cited in conversation throughout the high school and signifies the prevalent community values of acceptance, open mindedness and politically and socially liberal views.

One view expressed during the discussion is that the bubble exists, yet it has burst. Other participants said the bubble is more of a facade than a reality. One person said that it was real and doesn’t exist any place else, but another said that where she used to live (Cambrigde, Massachussetts), is a bubble in itself.

Some people said they don’t believe what Trump said while campaigning and doubted that he would follow through on promises. Others said that they would benefit economically from his election, but that they will not stand behind him. Some people wondered if Trump represented the middle class because he said he would cut corporate taxes from 35 to 15 percent. One participant asked how many uneducated, under-earning individuals would benefit from that.

Some said the media favored Democratic nominee Hillary Clinton. Others said that it doesn’t matter if you voted for Trump or not; it matters if you publicly stand up for someone who is that malicious and inflames hatred of other people

“If we stay together, we can fight together and stand together. It doesn’t have to be one person’s fight, and it’s nice to know that we can have an open forum like this,” Brandon said.

One individual announced that he voted for Trump, and the audience’s reactions differed. One person said that it was a brave thing to say, but others disagreed with his choice.

“I think what will come eventually out of this, not just today, but in the future, what will come out of it is change. Not only in Shaker but Cleveland in general,” said Sydney Connors (’10), who is a vocal coach and assistant director in the high school’s annual Sankofa performance.

“If what we discuss is taken out of the room, if we take what we learn and educate other people, then it will be effective,” Brandon said.

2010 graduate Nora Harris said that people always say that Shaker needs to unite, but she doesn’t want to see concerns overlooked as a result. She said we need to speak up and not be complacent.

“I think I would escort every single person that told me they weren’t voting to the polls. The fact that 46 percent of our voting country didn’t have a voice — it’s obscene to me,” she said.

The day after the election, Harris messaged Connors about her sadness and concern about the outcome. The idea for the conversation emerged from those messages.

“That’s not really the community that we foster, and that’s not how we were brought up as a group,” said Alexander Sobisch (’12). “Shaker’s always been a really safe space, I think, for every group of people, and I’ve always been really proud because as you go through your life, you realize there’s really nothing like it.”

Participants disagreed about how well integrated Shaker is.

“As I experienced, I don’t think that we do a great job integrating kids. There’s a huge CP-AP divide that’s probably gotten even worse with the IB program,” said Conner Speigner (’10).

Participants agreed that intolerance exists within other communities and that they fear Shaker will become like them.

“Shaker’s a really vibrant diverse community and one of the first communities to integrate back in the ’50s,” said Tony Bogan (’10).

Bogan said that if he were to discover a student’s racist remarks, he would sit down with that student and attempt to understand of why he or she would say such things.

“To be honest, I’m a believer in free speech, but there’s just a point where you can’t say stuff like that. You can’t say racial remarks like that,” he said.

Connors said that she was saddened and didn’t think that Shaker was a place where such an incident would happen. She expected that with all of the different school districts having hardships after the election, the chaos would skip over Shaker.

“I feel like Shaker does really well of getting together and talking and having a really constructive and productive conversation,” Harris said

“To me it’s kind of typical of Shaker. Even though Shaker says it’s very diverse, there’s still a lot of divide in Shaker even from when I was there,” said Stanley Vanpelt (’07).

Connors explained that all of the recent occurrences are encouraging people to want to make a change. “It makes me feel, in a sense, revolutionary.”

The graduates of 2010 want everybody to use their knowledge to make a change. They plan to hold another discussion. All current students will be invited as well as alumni.